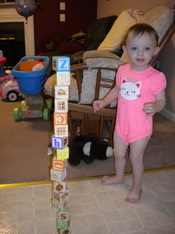 16 blocks! She dances around "I Did It!"
Myanna went to her feeding rehab OT and she has decided to try another route with Anna...It seems like trying new foods isn't exactly working and Anna has decided her bottles are much better and easier at filling a belly quick! She herself has upped her ozs and got her calories over 1000 and some days even 1200! The OT wants us to really work on just trying to get Anna to touch textures of all kinds, sand, pebbles, dirt, water, rice...whatever in order to get her more comfortable with touching things in general. Until she can touch, she will not be able to eat. She won't put anything in her mouth that isn't dry and crunchy. So, since all her calories and nutrients are satisfied by her milk combo then we give her that until one day, perhaps, she will touch some foods and be able to eat them...here's to hoping! In the meantime, we have been busy having fun in the nice weather...here are some updated pics for everyone to enjoy!

Anna went to the GI, Pulmonologist, and pediatrician this week...Im going with the weight from Children's hospital, since its higher...she's 22lbs 8oz and she's 32 1/2 inches long, still. The GI released her, basically doesn't have to see her anymore unless she has major issues with her reflux or starts vomiting again...Yay! The pulm dr said her adenoids are probably due to allergy...and we will just watch them. It's not bad enough to see an ENT yet. And the Pediatrician was thrilled with where she is now. She is gaining her weight back from being sick, she is talking, letting us know what she wants, she is more comfortable with people and she is in just about all the therapy she can handle. So, nothing to do but what we are already doing...Overall a good day of appts. Pediatrician said, really we just need her to grow now.

Yes, my baby girl is 2 and even though she is great at showing off her terrible 2 tantrums, she is still so much my baby girl. She is still tiny and petite. She still loves her bottle with no desire to ever let it go. She has many moments now that she loves to snuggle with me on my rocking chair, something I will never take for granted since it took her so long to want to feel my arms around her. Now she will grab my arm to wrap herself in my hug. This year she has had some amazing progress, she has come so far...she walks, she runs, she tries really hard to jump! She has started to walk with us while holding our hand, another big deal for her. She can do somersaults, she is learning to talk and says roughly 40-50 words, learning new ones daily, she can sign about 12 signs now and the best part is she is using her signs and words to help us understand her wants and needs, so for her...and us, less frustration. She loves making animal sounds and does at least 10. Due to a recent illness, she lost weight again...but I am hoping she has gained most of it back. It has been a rough 2013 so far for her, with multiple illnesses, from chest to ears to vomiting viruses...
Later in the week is her pediatrician appt and we can add her weight and height to our list of pros!

Her sensory processing disorder is the biggest problem we face now, it is what hinders what she can eat or drink. It is what creates issues with sleeping and staying in the car seat for long periods of time. It is what makes other people's houses overwhelming for her. It is also what keeps her from trusting people and the world around her. She has super senses that allow her to smell and hear what others don't even recognize. Helping her to lessen those senses is a long term task and goal for us. Here is a short description for those who are unaware of the term SPD...

Sensory processing disorder may affect one sense, like hearing, touch, or taste. Or it may affect multiple senses. And people can be over- or under-responsive to the things they have difficulties with.
In some children, for example, the sound of a leaf blower outside the window may cause them to vomit or dive under the table. They may scream when touched. They may recoil from the textures of certain foods.
But others seem unresponsive to anything around them. They may fail to respond to extreme heat or cold or even pain.
Many children with sensory processing disorder start out as fussy babies who become anxious as they grow older. These kids often don't handle change well. They may frequently throw tantrums or have meltdowns.
Many children have symptoms like these from time to time. But therapists consider a diagnosis of sensory processing disorder when the symptoms become severe enough to affect normal functioning and disrupt everyday life.
She was also recently diagnosed with some feeding disorders, related to her SPD. Basically leading to a general term, Anna is afraid to eat food for fear of the texture, taste or that she might choke. Her foods are still hard, dry and crunchy. The feeding OT recently told me Anna might just be this way, and slowly expand her foods over the years...yes, years. She is a severe case, apparently, and they don't want to push foods on her that scare her so they want us to introduce whatever we are eating and just let her play with it. She gets really upset when foods are on her hands, crumbs or anything with a wetter consistency so we have to be ready to wipe if she gets upset.


As for her developmentally, Myanna at 2 is very inquisitive and loves to figure out things, just last night she was working really hard on her building blocks. Every time they fell down, she would start again building. She was determined...her new record is 14 stacked, falling over with number 15! She now loves her swing in Occupational therapy, they just needed to swing her faster, she's a thrill seeker apparently...Amanda may have to be with her at the amusement parks because just watching her swing was making me nauseous. She is catching up to her actual  age, she is just a little bit delayed...we have not been given any approx age she is at. Overall, she is a happy little girl and loves to play and have fun. She loves to be chased or play hide and seek... I am so proud of how far she has come in just a few months with playing and talking...it has been a real transformation.

I think back over the past two years and have to wipe tears from my eyes...all she has been through has made her into such a tough little girl, but who really wishes a two year old to be so tough? The many illnesses and struggles she has been through have made the world a bit frightening for her and she always has her guard up. It's sad, for me, when we have such a huge family and it's so hard for anyone to get close to her. I know she is letting us in, slowly but surely. She is starting to trust and let her walls down, I can almost see it happening daily. Every time I see her let someone pick her up or allows them to hug her, I get teary. I know its another huge step for her, brick by brick...Yesterday she leaned forward and gave Amanda a kiss! This is like moving mountains! She has only given daddy and I kisses and they are very spread out and far between. But, she did it for her sister...and that is more than saying I love you, its personal for Anna. It's touching.

So, to sum up my girl...Myanna is beautiful, strong willed, inquisitive, intelligent, feisty, fearless, happy, sensitive, demanding, dramatic, determined, tiny and mighty! We Love you, More Than the World.

Moments I will never forget...just a few of my favorites...and, Amanda has decided to share the Princess title in the house...
Powered by