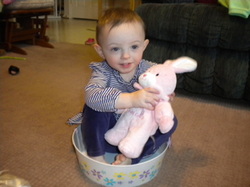 Baskets are to sit in, right?
Anna has had an up and down couple of weeks...she was sick, and then well, and then sick again. Both times with flu like symptoms. She is a little better tonight and finally drinking a little of her milk. She had a lot of fun helping mommy garden and then we gave her a bowl of water to play with,  but she thought it would be more fun to squeeze her whole body into it...she did the same with a basket I had. She likes small places I guess. She had her speech evaluation last week, and when they get an opening they will fit us in...she is doing pretty well considering where she was 6 months ago with language. She now says 36 words, more daily, but many are hard to understand...She can do 10 American sign language signs and imitates 10 animal sounds. We also went to an evaluation to start OT services for her sensory processing, that will be weekly and start next tuesday. She got spoiled with all her favorites for Easter from her favorite foods to her tv show characters, and a Horton the elephant from Dr Seuss. In just a couple weeks she will be 2, and she is already doing quite well with the terrible two temper tantrums.

We spent many many hours in DC yesterday to learn what we pretty much knew but were waiting for a professional to tell us...yes, Anna has multiple food aversions contributing to her not wanting to eat. What was caused by severe reflux, gagging and vomiting, congestive heart failure and open heart surgery, sensory processing disorder, and unfortunately getting the calories in Anna to survive...has created these: Infantile Anorexia (not similar to anorexia nervosa), Post Traumatic Feeding Disorder, Sensory Food Aversion and Food Neophobia. All comes down to this basic term...Anna is afraid to eat. The child psychologist was really sweet and seemed to understand Anna in a way most doctors had not. She said we will have to keep going so very slow and keep seeing our feeding rehab OT as much as possible, currently every other week. She was a little concerned with Anna and her constant moving, she doesnt stay still much, she is very inquisitive and it's hard for her to focus. I was worried she would be upset about the bottles or the co-sleeping or even the night bottles that we just recently stopped...but the Dr was not. She was amazed at how active and healthy Anna looked and really impressed by how we far we have gotten with her. She made mama feel proud...and by the way, Anna made her mommy cry...she said "mama" a couple days ago, I mean not just babbling like usual....She actually used sign language and signed Mama and said Mama at the same time right to me! She is coming along, not as fast as many professionals wanted her to...but she will catch up in her own time. She is still my tiny but mighty girl...she is now 22lbs 4oz, she lost a little weight. She is 32 1/2 inches long and her head is still at 18 inches. She will have her 2nd birthday in a few short weeks! Amazed she is already 2! She has some more appts coming up in the future, GI, pulmonologist, pediatrician and Ophthalmologist. Then we will probably have ENT on the list too for her adenoids...Below I put up some new pics...Anna in the snow for the first time...and some more! Enjoy!
As far as the sinus x-rays...all I know right now is yes, her adenoids are swollen, don't know how much or how restricting it is for her to breath. We will see the pulmonologist mid April with full appointment and disclosure of what this actually means for Anna....feeding eval tmrw...will update soon after...wish us luck!

Here's my big girl! This month she has added to her vocabulary, finally and there are many words we can understand...she tries so hard! She is finally gaining weight and as of today, she is 22lbs 12oz! This is huge, the biggest she's ever been, so we are really excited. She has a tummy again, woohoo!! She is still on her high calorie bottles and drinking more than usual, hence the weight gain. We are now going to see an OT in feeding rehab twice a month to help us try and teach Anna that food isn't going to harm her...sounds funny, but she really gets upset around food. She will be going to Children's Nat'l Medical Ctr in DC next week for a full feeding evaluation by a team of specialists. We are a quite nervous, but hoping they might be able to offer some insight and suggestions for us. She started doing somersaults which just gives her more to do with her never ending energy. Anna picked up a sippy cup and drank out of it the other day, just once, but we are hoping it will start to happen more often. She is starting to do numbers and if you say 1, she will say 2..and then 5, lol! She loves trains and says "choo choo" every time she sees one. I believe her 2 year molars are coming in, which for her teeth have always taken a long time. Her gums are sore and if you try to check she just might bite you, like daddy found out recently. No hands in her mouth except her own! I will have some new pictures when I get back from NY, so everyone can see how big she is getting! We even had to buy her some new shoes...and I think she is taller too, some of her clothes seem to be getting shorter on her. We did see a pulmonologist recently, Anna makes a raspy sound, like a cat purring when she sleeps and pediatrician thought we should have it checked out. He seems to think it might be sinus related, and he did x-rays, hoping to hear something today, but I called too late and they were closed. It could also be reflux related and he also suggested maybe doing a sleep study in the future...I will post an update next week after feeding eval and new pictures soon!! I cannot even believe she will be 2 years old in just a month!! 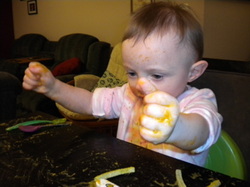 Myanna is doing well with food...she actually played with pureed squash and sweet potatoes and didn't gag or vomit! She ate a tiny bit when she ate a veggie straw that was dipped in the puree...Dylan came home for his spring break and before he left for his golf trip with his  dad, he got to have some fun with Anna and Amanda building blocks. Amanda popped in for the weekend to see her big brother and little sis too! Anna really enjoyed having them here and running around the house playing peek a boo. Her new thing is an attempt at jumping, she squats way down and then pops up to jump but only gets on her tippy toes, but she's trying! She is signing "eat", "thank you" and "more" a lot now. She has gained a few ozs and is 21lbs 4oz. She is talking more and more, saying please, flower, butterfly, block, and many more...a little difficult to understand, but she is trying really hard to imitate what we say! 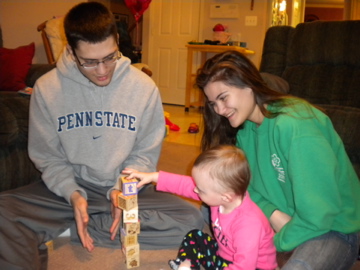 Dylan showing me how to build like an engineer!

Little update...I got an email from the feeding evaluation team and they will assess her and evaluate her towards the end of March, so finally, hopefully, some help for us...in the meantime, I have upped her calories with the high calorie drink I used to give her in the summer so she can gain some of her weight back that she has lost... 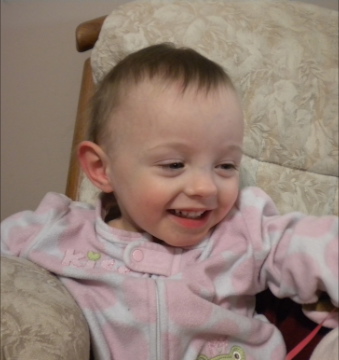 Here's our pretty girl!! Anna is starting to talk, slowly but surely putting some words in her vocabulary! Its great to hear her imitating sounds and trying to communicate. She is still in signing class and even though signing is slow it seems to be helping her to talk, either by repeating the words over and over or the catchy songs we sing. Either way, I am thrilled with the progress. We are seeing the OT feeding rehab person once a month right now, and no major changes yet. She has tried tasting what used to be her favorite soup, broccoli cheddar from Paneras, but only licking the spoon. She still loves the baguettes there! She has been drinking more bottles lately, I personally think she is hungry since she is barely eating her cheerios and other crunchy foods lately. We go back to see the feeding team evaluator soon and that may lead us to more help possibly. Especially since Anna reached her weight of 22lbs 2oz. back when she was 18 months and since then has actually lost and is 21lbs at this time. I was really hoping she would be a good 24 lbs by her 2nd birthday, but think that goal has passed. She is a very happy girl now. She is enjoying going out more and when the weather is nice we sneak in a walk which she loves. We cannot wait until spring to get back out to the parks! We will be signing up for speech soon and possibly some OT therapy for sensory issues. She seems to be doing much better with sensory, however. She still doesnt like stuff on her hands, but is finally letting us put glasses on her, for a short period and hats as well. This is huge for her!
Our biggest accomplishments of the month have been in the past week...she has finally started to sleep through the night. Its been a slow process but she was able to do it on her own actually and sleeping well at that. Some nights she still has some dreams/nightmares where she wakes and needs reassurance, but most she sleeps for a good 10 hours, another huge change for her! And mommy is really liking sleeping through the night too after 22 months!
Our second feat was just this past week again...we finally taught her to hold her bottle...its taken some patience and letting her know she could do it, but I think we have done it! At night she is tired and I will usually hold that one while I rock her, I dont mind the bedtime ritual we have :) but the rest she is doing all by herself and she is asking for them too! Overall, a rather productive month I should say!!
She is going through some changes...she has more hair, Yes!! and her eyes are changing color? They are not sky blue anymore but possibly a grey/green...maybe hazel? They are different every day? Either way, they are still beautiful!
Powered by