28 months, and we have KISSES 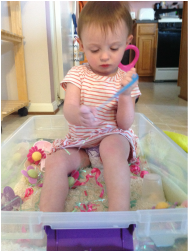 Anna still loves her rice box as well as her beans box...and likes to stretch the blue frog as you can see in her blur. She qualified at Child Find and they will evaluate her for speech services. We know this is much needed and feel if she is able to understand then she won't become as frustrated. She is learning new words and sounds everyday. She loves to laugh and giggle and wants to make sure everyone laughs with her. She is a happy girl and so intrigued by the world it makes all of us see it through her eyes. A couch isn't just to sit on, that's boring, it's the best trampoline in the world! And the new oversized chair...well that is to climb over, back and forth...
She played with a grape tomato today and had a great time investigating it. I think she got tomato seeds on all of us!

Pain, Patience and Perseverance....living with SPD

A few weeks ago, I was walking Anna in her stroller around the neighborhood. I started thinking how nice it was to have this time and how long it took us to get here. Most people are probably thinking, walking is normal...while others might be thinking, how lucky I am. But I don't think luck had much to do with it and this was not normal or easy at all. Anna's first summer she just cried, a lot. I think screamed would be a better word. She was so unhappy with everything. The way things felt, the sounds, the lightness, the smells...I just didn't know it or how to help her get through it. I didn't understand that she had sensory processing disorder, no one told me.

The next spring I wanted to be able to walk her in a stroller, but whenever we attempted it she would get so upset and try so hard to get out. She would cry and fuss, it just wasn't a good experience for her. She would get completely stressed out. When her first birthday came, I had a plan...a goal. Instead of a stroller, I found a trike that I could push so she could see all around her, she could even see behind her and me. Now, to start...it wasn't easy. The first walks were very short, she would still get upset, but it was tolerable. This was all because of her anxiety and she was on high alert, it was actually painful for her, an irrational fear she was trying to conquer. Together, with her daddy, we helped her to enjoy walks. Unfortunately she would not wear a hat, any type and she was still practically bald so on really hot days we tried to avoid the walks and always had to cover her head with sunscreen. So, became my next goal...Anna will wear a hat.

As the fall approached that year, she was 18 months old. With winter coming I wanted her to wear a hat, still light on hair and not the best immune system I felt it was necessary. I got a crate and filled it with hats, all kinds. We had knit hats, sun hats, fireman hats, and baseball hats among the pile. We would all wear hats, as a game. Family came over, they wore hats too. Still she wouldn't keep it on except for a few seconds. I saw how excited she would get when we were going bye bye, and started to put a hat on her just long enough to get to the car. She would take it off, I would put it right back on. As she started to comprehend language I explained to her that the hat goes on until she's in the car, and she started allowing the hat for just that period of time. Eventually she would forget that the hat was still on her head in the car.

As spring started to warm up the days, my next goal was a hat for the sun and for the walks in her trike. She did not like that idea at all. I would put the hat on, walk a few steps and she would throw it off. So I would stop. Put the hat back on, a few more steps and off it flew. That first 20 minute walk probably took an hour. Eventually the walks got better and stops got less. I would not continue until her hat was on. It wasn't the first time, the tenth time, even fiftieth time...it might have been over a hundred times...but whatever the number didn't really matter to me, it was to teach her and for her to learn a new skill. She will now walk an hour with her hat on. I was patient and I persevered.

As I was walking I was also feeling the pain, the pain of my own this time, not hers...my ankles that love to give out and shoot pain whenever they feel like it, my back that twinges just so when I push up the hills, my body that thinks I'm insane since it is getting older now and out of shape, and my hands with thumbs that are becoming dislocated due to arthritis. All of this, yet I am patient and I will persevere, because Anna needs me to do so. She needs me not to give up because its too hard for me, she needs me to help her to learn and be comfortable in the world around her. She needs me...everyday, and God willing I will be there for her.

Highlight of the month...Weighted Blanket 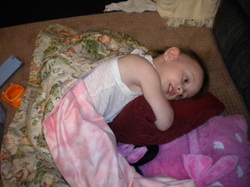 I decided to try a weighted blanket with Anna. Her bedtime ritual was getting crazy and she was staying up later and later, unable to fall asleep and still tossing and turning a lot at night. I ordered a Winnie the Pooh weighted blanket for her and the day it came in, she pulled it on top of her and said, "ni-nite" even though she had just woke up. Every night, she sleeps with her blanket giving her a nice warm hug and she doesn't move. Hours later I will go to bed and she is still in the exact same position she fell asleep in. She is going to bed earlier, sleeping much more sound and all this makes for mommy and daddy sleeping better. We had to stop speech through our private service since insurance is unwilling to pay for it. She is still receiving her Occupational therapy, now twice a week. I believe this therapy is going to be the key to her eating real foods in her future. Just this week she started tasting what used to be her favorite meal, broccoli cheddar soup from Panera's. This is huge for her. On wednesday, August  7th, she will be evaluated by Child Find, the county services for children with special needs. We are hoping that they will be able to provide her with some speech therapy. New for this month...we have kisses!! Real kisses coming to Amanda regularly and mommy sometimes! We also have kicking the ball and her jumping has gotten nuts! She goes around jumping all the time and saying "ribbit" (actually hobbit, but we know what she means). We had a couple days where everybody was off work so off we went to a museum the zoo, family fun days are awesome! Hoping to get the children's museum or Baltimore Aquarium in before summer is done...
We kept it low key for fourth of July, but did dress Anna up this year. At night I took her back on the deck to see the fireworks, but the sound frightened her so we stayed inside and watched a movie. Her sensory processing disorder is something we are still learning about daily. We try not to set limits for Anna, but then reality sets in and we are well aware of what is too much for her to handle, like the fireworks. She really is enjoying her big brother and sister being home. She is all smiles every time they walk into the room. She seems to have gotten taller lately, but upon measuring her, not so much. So I feel it must be her skinny appearance that gives the impression of height. Her weight and food battle is a constant issue and a fear that I am trying hard to deal with daily. The older she gets the more I am afraid for her future...She is certain to give up her bottle in the next year or so, maybe sooner. The problem with that is she needs 900+ calories a day, 1,000 would be ideal. Most days she doesn't get that many in which is why she is not gaining weight...but she is maintaining. What she does get is almost all from her milk combo that I mix together for her. Without her milk combo she would be getting maybe 100-150 calories from cereal and crackers, her only source of real food. The fact is, she refuses to drink her milk combo from a cup, any cup, and we have tried all...straws, sippy cups, open cups. As you see, my  dilemma is once she gives up her bottles, she will no longer be taking in any calories...and we will be stuck without options. I am hopeful and ask for prayers that the occupational therapist, feeding OT and child psychologist will have some sort of breakthrough with her in the next several months and she might actually start to eat food, but with each passing day my hope is fading. She is such a happy girl, energetic and high spirited. Just wish all that energy would cause her to be hungry enough to conquer her fears and be able to eat.

She will be 27 months in a few days time. She still wears mostly 18 months clothes, a few 18-24 months. Her hair is finally growing in and her smile is forever contagious. She has become much more affectionate lately and I have received many more hugs from her. Her vocabulary is growing and she is finding ways of communicating her needs to us. She loves her mama's tea and will ask for "tea please" with a big grin on her face every morning. She still loves going for walks and the playground and hope to get to some museums soon and the Washington Zoo. She likes to draw and color a lot, making circles and scribbles.
We took a NY trip in the end of June to see our new nephew, Mason. Anna loved him! It was a long trip, but somehow Anna did very well. She loves running around and playing with her cousins in NY. Playing in the pool her definite favorite.
Powered by