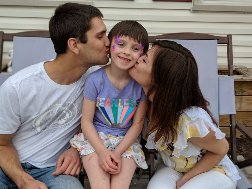 Myanna just recently turned 7. It's been a long time since I have added to this website. Over the past couple years she has been thriving. She is just ending the first grade. We moved to a better school district and she is doing very well. Our new home is close to family and she can see her Nanny, PapPap, Aunt Denise, Isaac and Daniel more often.
She has lost quite a few teeth...7 to be exact. But, only 4 adult teeth have made their way in. Next month she will hopefully get her new 6 year molars sealed to protect them. The dentist is a bit worried about her gagging, and such...fingers crossed. She has had many accomplishments over the past two years. She now is riding a bigger and faster pony named Max. He is wonderful with her and she has moved into the big arena for practice sessions. Recently we removed her training wheels and after only a few tries with daddy and Dylan she was on her own. (Dylan pretty much got to run next to her). She received a new scooter for her birthday and has been practicing on that as well.
Myanna still receives OT twice a week and presently is dancing in a tap class and an adapted ballet class. Recital will be in June and photos will follow. She has obviously grown and is just shy of 4 foot and about 43 pounds. She did make it to 44, but lost the weight again. She loves the piano and makes up music all the time. Of course drawing I think is still her favorite thing to do.
As far as what I used to do...let's get to it. At the age of 7, I sit here like the years before and think of what Myanna can do. It's a better practice than thinking of the negatives in her life, so we celebrate the positives. There were so many tings we weren't sure about for so long and this year she hasn't disappointed us with her accomplishments.
She is reading much better, and reads books to mommy before bed. I'm not sure what level she is currently at, but she has done very well. SHe's learning to add and subtract. She just learned how to ride her bike without training wheels. She lost 7 teeth and gotten 4 new ones and four molars. She's been on a new inhaler since August and was rarely sick this school year. If she had a cold, she got better! No bronchitis this year! She can blow up a balloon. She can tap dance really well. She wanted and got a pixie haircut and loves it! She can jump and flip on trampolines. She can swim well enough to be in the 4ft section of the pool, with bouncing. She has an amazing boisterous laugh than can make anyone smile. She LOVES rocks and digs for them daily at school. She had a rock and gemstone themed birthday party this year. She can do cannonballs in the pool. She plays cards and enjoys go fish and old maid. She plays on my phone and loves Snoopy Pop. She loves water slides. She can ride her pony in the big arena. She's learning to gallop. She wants to go fishing this summer. (which could be problematic since she loves worms...) She wants to ride a skateboard, and learn to skate on her new rollerblades.
In the past couple years she has gone to the beach, and to visit family. She went on a Halloween Disney Cruise and the following year a trip to Disney World.
She started a new business, with mommy. She has a shoe fundraiser going. She drew a shirt design. She wrote a letter to TY, inc and they sent her horse beanie boos for her Heart totes. She is collecting toys, games, books, and much more for children after heart surgery. To bring smiles to their faces.
Powered by